The Pink Patch Project is a collaborative effort between the Los Angeles County Police Chiefs’ Association and public safety agencies throughout the country and beyond. Originating in Southern California, it is quickly becoming an international initiative. The Santa Ana Police Department (SAPD) along with the Santa Ana Police Officers’ Association has participated in the Pink Patch Project since 2017. Read more about the 150th anniversary of The City of Santa Ana.

In joining, Santa Ana Police Department has have agreed to have their police patches made into a vibrant pink version, which are now for sale. Proceeds from the sale of this patch will be donated to Breast Cancer Solutions!

Choose from the following options: 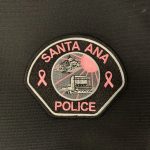 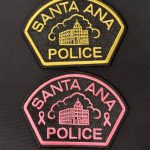 If you have questions about the Pink Patch Project, email SantaAnaPDPinkPatchProject@gmail.com